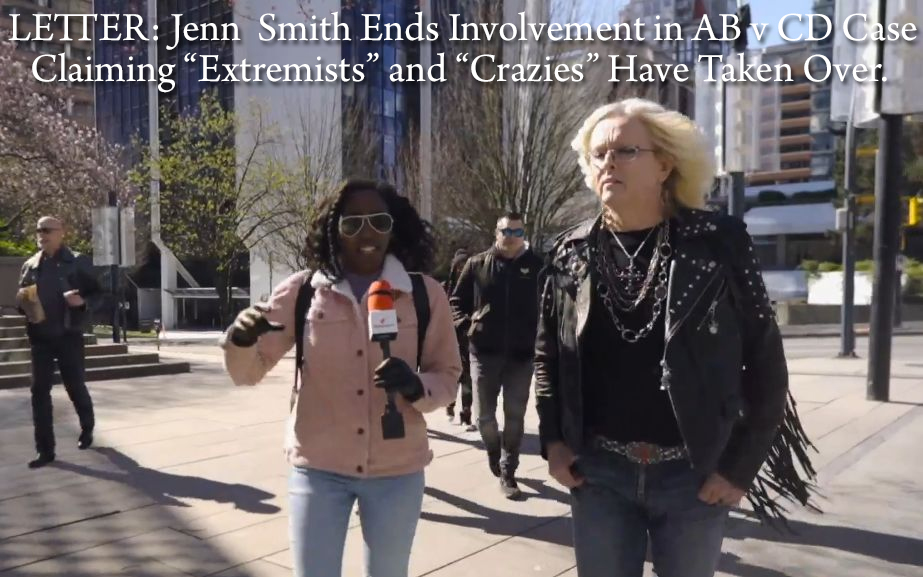 A Letter Regarding AB v CD and My Future.

I have received some letters and communications regarding my announcement that I am done with the AB v CD case. In the interest of addressing all such questions at the same time I am going to publish below an edited/expanded reply letter I sent to somebody that asked me what was happening:

“Let us not seek to satisfy our thirst for freedom by drinking from the cup of bitterness and hatred. We must forever conduct our struggle on the high plane of dignity and discipline.”

CD, the BC father who was forced to facilitate his daughter’s pharmaceutical transition into “the opposite sex” and was subsequently sent to jail for breaches of anonymity orders, has been co-opted by far right-wing crazies of the most extreme sort. I realized this was a danger when he got out of jail and that he might return to these lunatics, but I was a little surprised that he did so the moment he got home and began insulting me right away after the enormous time and effort I put into first trying to mitigate his sentence then get him a lawyer and out of jail.

So I’ve let him go to follow whatever path he wants to follow. I can’t keep bleeding time and money and energy into this case. Unfortunately, he is now surrounded by people who actually want him in jail so they can scream and yell about how evil “the Satanic leftist Communist establishment” is. Many are what I call “outrage grifters” profiting off of his misfortune, but I can’t keep fighting against that, my health is beginning to fail. If his defense needs or wants me to testify regarding the sociological and psychological influence of these extremists on his psychology, I am still willing to do that, but beyond that I must remove myself from the case.

It makes me sad because when he is away from these people he actually is a good person and I regarded him as a friend. Despite him saying very mean things to me at times, including immediately after he got out of jail, I never criticized him in public as I regarded him as a victim, and still do. I recognize that his behavior has been influenced by the trauma he has endured and the vultures that have perched themselves upon his shoulder screaming constant messages of hate in his ear. As I wrote in my recent essay, I think he did the right thing but in the wrong way, and the latter is largely a result of these negative influences and his powerful inner desire to single-handedly turn the tide.

If he comes to realize how he is being manipulated and used by these people I will forgive him, but until then I must leave him to his chosen path. I have had to deal with these people over the years myself and know them well, they comprise a reasonably small percentage of the Christian community, but represent a very negative and destructive force and they have at times tried to operate their control over me. Fortunately I am cult-proof and love bombing etc only sets off alarm bells in me, probably because I never trusted “love” as a foster child and regarded everybody as insincere and still have that innate suspicion in me.

It’s a bit of karma too, I suppose, because I’ve talked about (in my Synanon essay) how certain aspects of transgender ideology was cult-like, and now my friend is caught up in a different type of crazy far right Christian cult psychology. I always knew there was that element running through Christianity but I chose to ignore it because I believed the importance of my goals regarding bringing an end to child medical transitioning superseded that. Well apparently that’s not the type of thing that should be ignored or it will come back to bite you.

I have always had a respect for the C.S. Lewis type of balanced Christianity. Lewis was extraordinarily intelligent and proved that Christianity could be thoughtful and intelligible and respectful, but the far right extremist “immanentizing the eschaton” type of Christianity is, in my opinion, a cancer on the soul of humanity and the sooner this impulse disappears into the mists of history the better. If Christianity does not represent and proceed with love then it represents the devil they claim to oppose and has more in common with the medieval inquisition than the teachings of Jesus.

I’m tired of extremists and I’m rapidly running out of energy. A person can only endure so much anger and hatred and duplicity and backstabbing. I have no idea what the future holds for me. I have some healing to do because I have put far too much stress on my aging old heart.

I was never a mean person by nature, but whatever mean reactions I might have let slip out at times because of frustration have softened over the years. I grew tired of the perpetual anger that surrounded me. Over the last two years, largely as a result of the influence of Donald Trump in the U.S. and Jordan Peterson in Canada and others who constantly fan the flames of hatred, division, and anger, that hatred and animosity has escalated to the point that I do not recognize many people anymore. I cannot travel with them down that road. To hear and see all these “Christians” yelling about war and total victory…I just want to stop walking and say, “go…go to your destruction you fools…go. I tried to help you, but you go now…” All I want is for big pharma and its agents to stop preying upon vulnerable kids. But I am running out of energy.

I suppose before my old heart stops beating I should write about what I learned during four years deeply embedded in the Christian right. I learned a lot and I doubt the crazier Christians will like what I have to say but that is for God to sort out. The vast majority of Christians have nothing to fear from my words because my criticism is directed solely at an extreme minority within Christianity. As I said in court, most Christians are just good decent people, but there is a powerful element in the far right of Christianity that is fundamentally hateful at its core and probably dangerous to the harmonious evolution of our species.

For my Christian friends.

“Whoever does not love does not know God, because God is love”

“You shall love your neighbor as yourself.”

“If anyone is caught in any transgression, you who are spiritual should restore him in a spirit of gentleness.”

For the record, I do not want to let far left extremists off the hook either. Extremism in all its forms is, in my opinion, the problem in the world today. Below is a screenshot of my reply to somebody on the left claiming the attacks on me by right wing extremists was politically motivated: