Jenn Smith’s letter to the Premier of BC and the Ministers Responsible for Education and Children.

I thank you for your attention. Please be advised that I am BCCing this email to the media and many community leaders.

My name is Jenn Smith, I am a transgender identified male and I have been a leading opponent of SOGi 123 in BC for over two years now. I am also an opponent of various laws and regulations that threaten women’s rights, parental rights, and free speech. I am a university graduate and have degrees in History and Political Science. I have also begun writing for the Post Millennial nationally on this issue.

As a former ward of the province of BC (I was a troubled and traumatized child that began experimenting with transgender behavior very young), I am now very concerned about the numbers of foster children that are now identifying as transgender and falling under the care of Dr. Wallace Wong, who recently seemed to suggest these kids should “pull a stunt” and threaten suicide to get the “help” that they want, which too often leads to toxic drugs and synthetic hormones.

In a recording recently released by Culture Guard (which I am not associated with), Wong seemed to suggest as much as 50% of his child patients were wards of the province. This is startling and deserves an immediate inquiry. Our foster children are the children of the people of BC, and if there is any chance Wong, the pharmaceutical industry, or anybody else is taking advantage of these traumatized children for profit, the government must act immediately to stop it. These are our very most vulnerable children and I strongly encourage you to hear my voice on this and other related matters. I understand these children because I was one of them. Our government needs to move towards protecting these kids from vested interests.

As you may be aware, in the last municipal elections some 128,000 British Columbians knowingly voted in favor of openly anti-SOGI 123 candidates despite massive government propaganda demonizing anybody that opposed it. There are good reasons people oppose it that have nothing to do with hate or bigotry. As just one example, in my presentations I talk about how it is our very most vulnerable kids that are falling for this potentially devastating life choice. It would seem our government either is not aware of this or has chosen to ignore it or deliberately obscure it. Whatever the case, you need to hear this information.

The BC Infant’s Act is another issue that must be addressed immediately by this government as it is trampling the rights of parents and facilitating “sex reassignment” for minors, which was clearly never the intention of this Act. This Act’s application in the courts, as I wrote about for the Post Millennial, is nothing short of draconian and should terrify all BC residents. This has all gone too far.

This email is thus an invitation for you to attend one of my upcoming Vancouver Island public talks (locations and times listed below) and become educated on these issues. I am also available to do a private presentation for any elected officials that want to know exactly what it is I have been saying to people and will continue to say to people as long as I can. I continue to amass data and evidence daily.

I have attached a link to my talk description and invite you to attend my presentation and critique and question any of my information.

Your Vice-President Morgane Oger is trying to get me deplatformed and prevented from speaking what I believe to be important truths to the people of BC, and I certainly hope you will rebuke Morgane for this horrendous display of disrespect for freedom of speech. Freedom of speech is the foundation upon which free societies are built. Without free speech, freedom dies. If Oger and this government do not respect free speech, then you do not respect freedom at all.

Morgane is also disparaging me and all BC residents that have dealt with trauma and depression by using my admission of these issues in myself as a weapon to justify silencing me. I was traumatized in the foster care system in BC and then in the BC school system, and I emerged from that with scars as so many foster children do. For Oger to use this against me is inexcusable behavior, something Morgane now specializes in. Oger’s efforts to defund the Vancouver Rape Relief constitutes a particularly odious example of this. Morgane has become an embarrassment to the transgender community in BC and its worst representative.

I would also like to request a one on one meeting with each of you, or a three on one meeting, some time next week to discuss the major issues of concern. I am also willing to meet you at the legislature as it lets out.

You are the leaders of our province on these issues, and I am a leading voice of dissent on this issue. We need to sit down and talk, if for no other reason than to show you actually care about what marginalized voices have to say. I strongly encourage you to give dissent a respectful hearing.

I thank you for your attention,

To see my talk description, please go to this link: https://transanityca.wordpress.com/2019/03/04/jenn-smiths-transgender-truth-presentation/ 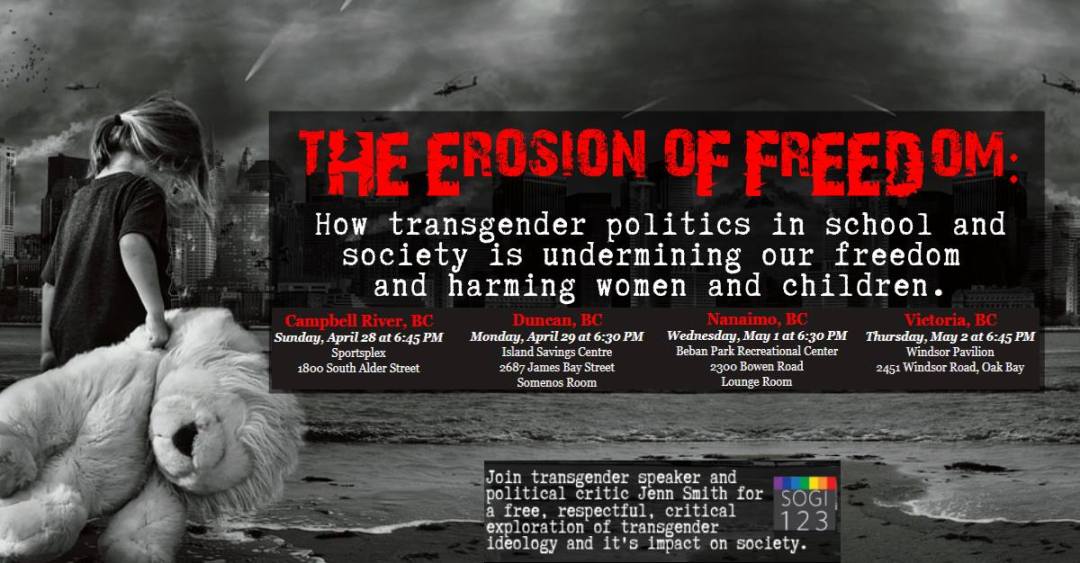 2 thoughts on “Jenn Smith’s letter to the Premier of BC and the Ministers Responsible for Education and Children.”