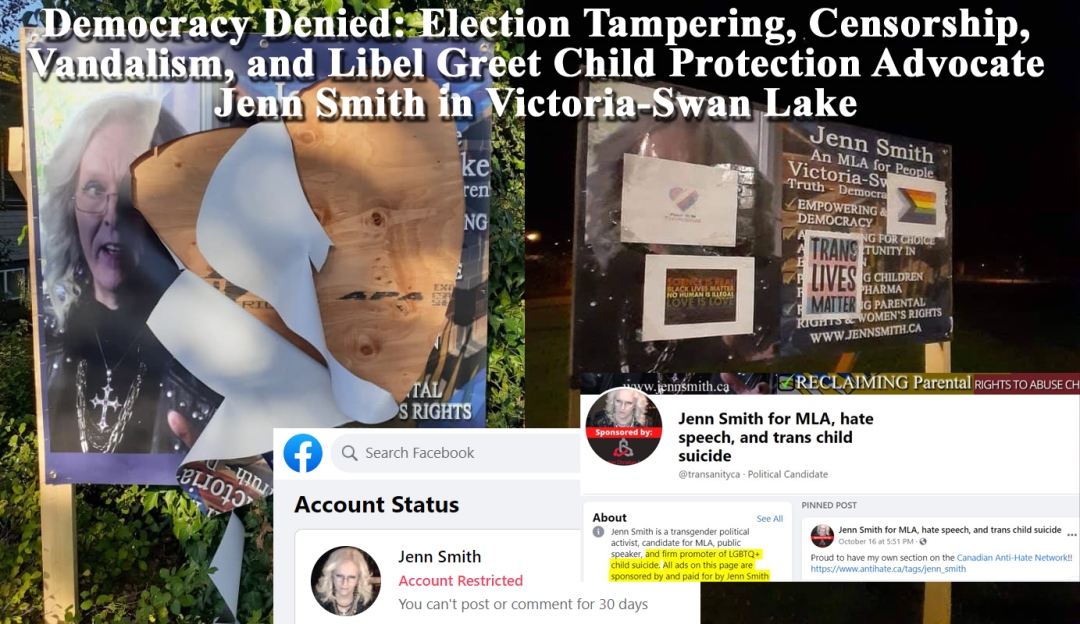 “I have been accused of promoting hatred because of my stance on transgender issues, such as my opposition to the medical “sex reassignment” and pharmaceutical sterilization of vulnerable children,” said MLA candidate for Victoria-Swan Lake Jenn Smith, “but when you look at what has been directed at me during the course of this snap election campaign in British Columbia, any neutral person should see that the only hatred being directed at anybody is by my opponents at me — these people have proven they have contempt for truth, open debate, fair play, and democracy.”

Smith, who was born male and identifies as transgender, was referring to assaults that have been launched against his campaign primarily by LGBTQ activists who regard his opposition to the pharmaceutical “sex reassignment” and sterilization of large numbers of foster children and other vulnerable youths as somehow “bigoted.”

Activists recently took to the streets removing two signs and vandalizing two others. Vandalizing election signs is a criminal offense in Canada as it is considered an attack on the democratic process. All candidates are supposed to be given an equal / fair opportunity to share their message with the community. Smith has also been excluded from all-candidate debates.

The social media platform Facebook, which is where Smith decided to put a campaign page designed to facilitate input with the public and advertising initiatives, has become a battleground. Activists have aggressively swarmed the campaign page and Facebook account, showering him with constant insults and false accusations.

In addition to the constant stream of vitriol, opponents set up two fake Jenn Smith Campaign pages, including one made to look exactly like Smith’s actual page but containing false and libelous statements such as suggesting Smith promotes child suicide.

Multiple reports were filed with Facebook, who has a policy prohibiting impersonating a person or organization and also prohibiting targeted disinformation, but Facebook refused to take down the page stating that it did not violate their community standards. So while Smith’s fellow candidates were all still using Facebook (the most powerful communication platform in the world today) to campaign for the election and while Smith’s opponents swarmed him with libel and false accusations, Facebook suddenly and without valid explanation (during the most critical week of Smith’s campaign) banned Smith for 30 days from posting to Facebook, meaning Smith could no longer create ads during the critical final week or defend himself against the fake pages and information being spread against him.

Smith has said, “Facebook has become the most powerful communications platform in the world where most people go to get information. For Facebook to arbitrarily censor and silence a political candidate during an election while platforming and allowing other candidates to use their service is inexcusable. Facebook’s policies also allow for vexatious and libelous attacks by opponents deliberately designed to silence candidates. This kind of arbitrary censorship of political candidates has the power to sway elections and silence debate on key issues. The fact I am not a favorite in this election is absolutely immaterial to the precedent this sets. If this can happen to me it can happen to anybody, I am a canary in the coal mine of freedom and democracy… This should be a wake-up call for everybody regarding the outrageous and unaccountable power of this ever-growing communications Leviathan that is now swallowing democracy and freedom of speech whole. “

Smith has been trying for two years to get provincial and national inquiries into what he regards as a crime against very vulnerable and easily influenced youths and children. “We have numbers now that, if accurate, suggest that at least 7.7% of all youths in government care may be identifying as the opposite sex — half of these youths are indigenous. Whereas 1.7% of children generally present on the autism spectrum, transgender youths present on the autism spectrum at rates ranging between 8% to as high as 54% depending on which study you look at. All of this is completely unprecedented in history, and should alarm all thinking people. It is my contention these youths are being preyed upon by a rapacious and greedy pharmaceutical complex and its agents. As a former foster child myself I cannot sit silent while these wounded youths are pharmaceutically and irreversibly sterilized. While I will concede we do not know the exact numbers at this stage and will not know until we get an inquiry, it is well past the point when we should be investigating it.”

Smith’s persistent calls for government inquiries eventually reached the ears of former Conservative Party of Canada leadership candidate Derek Sloan, who was quite alarmed by the statistics and agreed to read Smith’s call for an inquiry into the House of Commons. Despite Sloan’s support, this is an issue most politicians will not even look at.

Smith entered the race in Victoria-Swan Lake partially to be able to confront Education Minister Rob Fleming, whom Smith maintains has supported programs in schools that lead to the confusion of vulnerable youths and put them on a path towards medical transitioning. “These materials are in my opinion dangerous to confused and damaged youths and should be pulled out of the SOGI 123 resource pool.”

The issue related to child transitioning is clearly Smith’s primary platform point, but Smith says this problem points to bigger problems in our political establishment. Smith, a graduate of Simon Fraser University (History/Political Science), maintains the government is becoming increasingly intrusive, totalitarian, and indifferent to traditional values. Smith is also an advocate of responsive government and direct democracy initiatives, and the protection of women’s sex-based rights as well as a restoration of parental rights, both of which Smith maintains are under assault.

[Note: this is text of an article appearing in the National Telegraph]

Smith’s petition to get a national inquiry, open to all Canadian residents to sign:

Smith’s video call for a national inquiry with statistics backing his claims: