On Tuesday the BC Supreme Court ruled on my application to have publication bans lifted that currently restrict me from speaking the name of doctors who are involved in the medical transitioning of children and advocate affirmative policies for the same. These doctors are policy advocates and activists just like myself, and just like myself should be open to public scrutiny.

(See Jenn’s highly emotional statement after returning from court physically and emotionally exhausted at the bottom of this release).

In an extensive presentation I attempted to prove to the judge, not that my thesis regarding what is happening with the transitioning of vulnerable children is correct, but, rather, that I have a thesis that attempts to prove these things and that not only do I have a right as a political activist to present that thesis, but the public has a right to hear it. Furthermore, I illustrated why it is important that I (as a transgender identified political activist) — a kind of whistleblower — need to be able to name names and connect different parties, particularly when illustrating harms caused by certain publicly engaged doctors and conflicts of interest with pharmaceutical companies. My thesis maintains that this transgender agenda is an establishment agenda ultimately driven by corporate financial powers, and I cannot raise awareness in that regard without naming names and connecting dots.

After hearing my plea, the judge agreed to grant me a highly restrictive concession in the form of allowing me to speak the names of the doctors in question, but only within closed public talks with restrictions so cumbersome as to make it virtually impossible to enforce and certain to fail. It also limited the scope of my ability to connect dots and to use that outside of rental rooms to support my call for provincial and national inquiries. 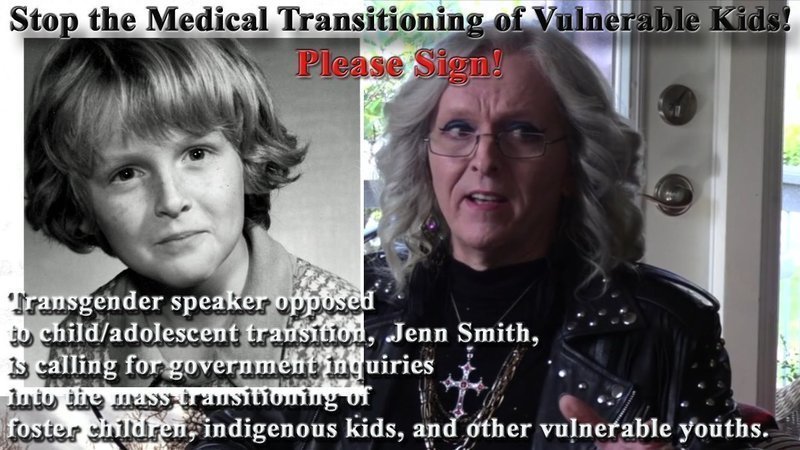 Almost immediately after I was granted this exception for public talks, lawyers for the other side and the government health authority immediately snatched the crumb away from me and filed a successful application to stay the ruling and send it to the BC Court of Appeal. They had come prepared for this, as they had prepared all of the paperwork ahead of time and had their binders and books of authority pre-prepared:

For three years, I have been, in every instance, doing what I believe to be the right thing no matter what anybody said about it, including people on the same side of the debate (see at the bottom the video I made for the court in order to illustrate my own personal investment in this subject and the enormous public interest in this issue).

I have followed the truth and what I think is right and not clicks or money or political alliances.

I am an anti-establishment person in the sense that I have no faith in any political parties, but I do not like not having faith in our system. So I decided to obey the court orders until I could go to court and present my best arguments for the defense of freedom of political speech and encourage the court to realize that this case was founded on forcing the father to speak and accept lies about his own child.

I went to the Supreme Court with my best material and arguments to give our judiciary the opportunity to do what is right. I went to give them a chance to serve as that last line of defense between the citizens and the emerging control state, and at the same time restore my faith in the integrity of the courts.

They did not do that. They threw me the tiniest crumb, and then the other side immediately snatched it away from me. Rather than acknowledge the outrage of forcing citizens to speak lies and hiding activist doctors behind the robes of the court, they validated all of this and defended the establishment instead of individual liberties and the integrity of our democratic process.

It appears their agenda now is to make my life as miserable and expensive and preferably as dis-empowered as possible, which, ironically, suits the interests of many on both sides of this debate. But I am not going to worry about that or play that game anymore. I tried. I sought justice. But justice ceased to exist the moment the new “Ministry of Truth” forced a father to call his daughter a son.

I have no intention of letting these people turn my life into a legal nightmare. I will continue to do what I believe is the right thing to do.

I have lost all respect for our judicial system. It is impossible to have respect for a court that cannot comprehend the insidiously dystopian implications of a state forcing its citizens to deny truth and say that boys are girls if big brother says so. Any court or government that untethers itself from truth, simultaneously untethers itself from justice and becomes nothing more than the arbitrary enforcing arm of an increasingly totalitarian an Orwellian state.

The only power this court has over me is that which comes out of the barrel of a gun, they have no moral authority — and at this stage I have a moral duty to refuse to comply with the order to shield these doctors, who in my opinion are destroying the bodies of our most vulnerable children.

Martin Luther King Jr. once wrote that, ” An individual who breaks a law that conscience tells him is unjust, and who willingly accepts the penalty of imprisonment in order to arouse the conscience of the community over its injustice, is in reality expressing the highest respect for law.”

I would concur with King’s statement, and note that it is this court itself that has no respect for the law, because a law that forces citizens to speak lies and hide truths critical to the public interest is no law. Law gains its moral authority via its dedication to the truth, which this court has abandoned.

For my own part, I will continue speaking what I believe to be true and important. I would rather the courts permit me to do so, but I will either be allowed to continue speaking the truth that the public needs to know, or they will have to physically prevent me from doing so.

As my planned talk at my alma mater, Simon Fraser University, was cancelled by administration for March 14 citing “safety concerns”, I now have plans to make an announcement on Youtube on March 14 regarding the doctors involved in this case and the necessity of holding them accountable.

[Note: media or others looking to contact me should do so using the contact link on this page found here: https://transanityca.wordpress.com/contact/]

(Jenn’s interview with Kari Simpson outside the court on day three, after all day in court and only two hours sleep the night before. Jenn is not associated with Kari Simpson’s Culture Guard but they have been on the case since March of 2019. The father has wanted everybody to be clear though, that he has no relationship with Culture Guard ore Kari Simpson. Jenn broke this story internationally in December of 2018 )

(Jenn’s highly emotional statement after day four in court and after returning home after a long drive and all day in court again. Jenn was emotionally and physically exhausted as he has been fighting this and doing the paperwork etc alone with almost no help while working a regular job 40 hours a week

Maxine Court over for the day from RoadKill Radio on Vimeo.

(Whereas doctors on the other side of this debate get the full protection of the state, I, on the other hand, have evidence the state is standing police down and feeding me to the wolves when they knew hundreds of protesters were coming to my talk at a public venue with the stated goal of shutting it down