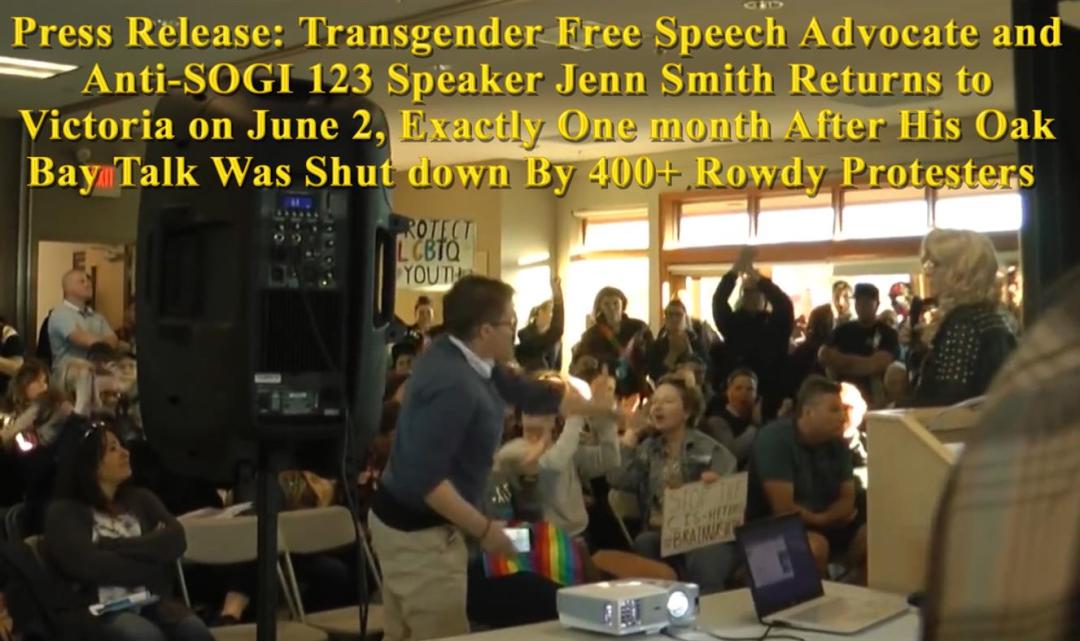 Press release: Transgender public speaker Jenn Smith announces his return to Victoria on June 2 to give a controversial talk on transgender laws and programs in school, including SOGI 123. The talk is entitled “The Erosion of Freedom.” Smith notes that his talk is focused almost entirely on transgender issues and how new laws and programs are endangering women’s rights, our most vulnerable children, parental rights, and freedom of speech.

Smith’s talk is scheduled to take place one month to the day after his last talk at the Windsor Pavilion in Oak Bay was sabotaged by unruly protesters on May 2. Despite a massive crowd of over 400 protesters disrupting and shutting down his last event, Smith says that he and his co-sponsor the Canadian Christian Lobby are “undeterred.”

Smith also says that what he calls “a police stand down” on May 2 may be the subject of upcoming legal action against the City of Oak Bay and the Oak Bay Police for failing to live up to their responsibilities under Section 34.2 of the Police Act. Smith says Oak Bay police failed to protect not only his right to speak on May 2, but the right of Oak Bay citizens to hear what he had to say. Smith called the decision to send no uniformed police to an event with over 400 protesters “unprecedented” and put everybody in attendance in potential danger. Sections 176 and 430 of Canadian Criminal Code were both flagrantly violated. Smith said, “we cannot allow the use of brown shirt storm trooper tactics to shut down free speech; if any crowd of hooligans can shut down any talk and get the speaker declared a ‘public safety risk,’ the future of our democracy is bleak.”

This event has a $5 minimum donation entrance fee at the door in order to regulate attendance (the last event had no entrance fee), security will be present, and the law will be enforced. The venue is not being announced until 3:33pm June 2nd online and by email in order to avoid venue staff from being harassed by protesters.